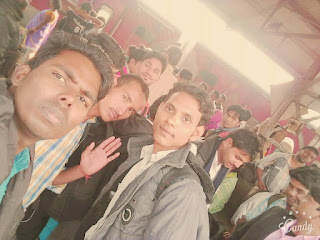 2 teachers were also with them to take the exam.

The train in which the students and teachers sat departed around 2 pm from Gaya and reached New Delhi in early morning on the next day.

This time, three of my children also decided to take the JLPT exam.

They are Japanese, so they don't have to take it but they wanted to measure their own abilities on Japanese fluency.

My children and I departed from Gaya by another train around 10:30pm on 2nd Dec.

It is winter in north India from December to January.

Trains tend to be late because of heavy white fog in that season.

Our train was expected to arrive around 10am in the morning on the next day, but it arrived at around 7pm. 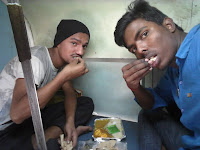 It is usual for trains to be late in winter, so there are some extra food stocks in the trains.

The extra menu which are provided when a train is late are very simple, like rice, beans soup and pickles.

The simple food was tasty this time, maybe because the cook was good skilled.

It was 9 hours late, so we had been sitting for about 23 hours on the train.

After reaching New Delhi station, we rode Metro(subway) to our home.

I usually take taxi from New Delhi station because I always bring a lot of luggage.

But this time I rode on a train of Metro with a baby and a lot of luggage because I didn't have much money to hire a taxi.

I think some people know this news that India government suddenly banned old 500 and 1000 Rs. notes, so people rushed to bank to exchange them into new notes but there had been less new notes in banks.

The students and teachers would have stayed at a hotel near New Delhi station in our plan, but since we didn't have any money, so I decided to let all of them stay at my house!

My children and I arrived home at around 9 pm.

The train the students rode hadn't arrived at Delhi yet.

They finally arrived at New Delhi station around 11 pm.

The expected time of riding the train was 16 hours, but it was more than 32 hours ride.

They caught the last train of Metro and reached my home.

They ate plenty of chicken curry which my sister in law prepared for them.

We spread mattresses and blankets on the floor of the living room and they squeezed to sleep all together.

They had to reach the venue for the JLPT exam before 8 am next morning, so they woke up around 5 am to get ready.

They slept for only 4 hours.

They took Metro to the venue.

the exam took place in some schools, which were separated by the levels.

The JLPT exam started at 9 am and ended at 12 noon.

After that, they went for shopping and directly reached New Delhi station around 7 pm.

The train for Gaya should have departed around 10 pm at the night, but because of the foggy weather the train was late and it departed at 6 am in the next morning.

They had slept on the platform whole night while waiting for the train. 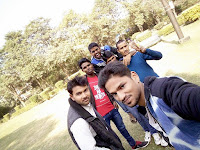 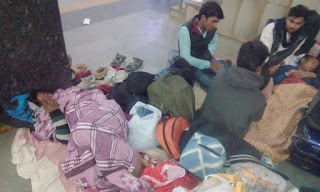 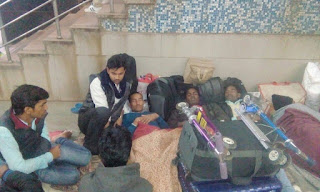 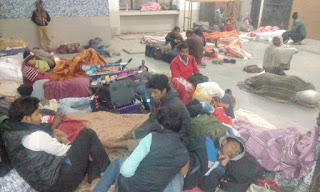 My children and I couldn't get tickets for the train, so we flew from New Delhi to Patna (took about one and half hour) instead, and rode a car to Bodhgaya from Patna.

The road was jammed by trucks, and it took 6 hours to get to Bodhgaya, though it usually takes 3 hours. We arrived at Bodhgaya in the midnight.

The students and the teachers arrived at Gaya station at 5 am in the morning.

It took over 23 hours for them to return.

Well, the results of the exam will be out after 3 months.

I wish they will get rewards for their efforts...!