The following morning, we loaded into the van and made our way to Surya Bharti school. We weren’t quite sure what to expect, but knew that the few YouTube videos we had seen on the NGO Children Aid channel couldn’t fully prepare us for what was to come.

As the van approached the schoolyard, we could see five even rows of blurry maroon-colored dots next to the school building. As we came closer, these dots crystallized into figures of the schoolkids wearing their maroon-colored sweater uniforms. They were chanting their morning greeting, right hands raised as they repeated the captains’ calls.

We hopped out of the van as the students finished their routine and walked up to face them. Slightly nervous, we introduced ourselves in front of the group in the Hindi words we had learned just that morning: “Mera naam Erica…” “…Mera naam Megumi,” we awkwardly fumbled as the kids stared back at us with expectant expressions. We quickly had to revert back to English, and can only hope that our sincere gratitude for their welcoming us to their school was properly conveyed.

After the kids dispersed to their various classrooms, we visited the smaller groups and re-introduced ourselves. We were then ushered into the newly-built library, where we commenced teaching for the day. We taught four grades, with students’ ages ranging from 13 to 16 years old. One thing that struck me immediately was the rapt attention with which we were greeted. I couldn’t help but contrast this respectfulness with American students, who tend to disengage in the classroom, or, in the worst case scenarios, torment substitute teachers with endless chatter and paper airplanes. 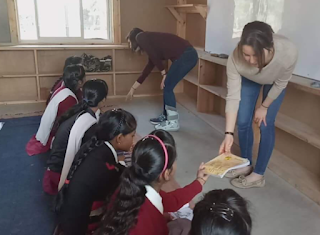 It was fun to get a glimpse of what the students were learning in class, whether they were reading stories about pet bears, or poems by Silvia Plath. We tried to plug into their curriculum in order to strike a balance for them between the familiar and the new and to establish a sense of continuity with their current lessons and exam schedules.

The most rewarding moments that first day were when the students asked questions, thirsty for knowledge of English vocabulary and pop culture. And, of course, when we sidetracked a little to listen to Michael Jackson’s “Man in the Mirror,” with the kids singing unabashedly along. In those moments, we couldn’t help but smile cheek-to-cheek – especially when one of the alumni showed off his Michael Jackson moon walk.